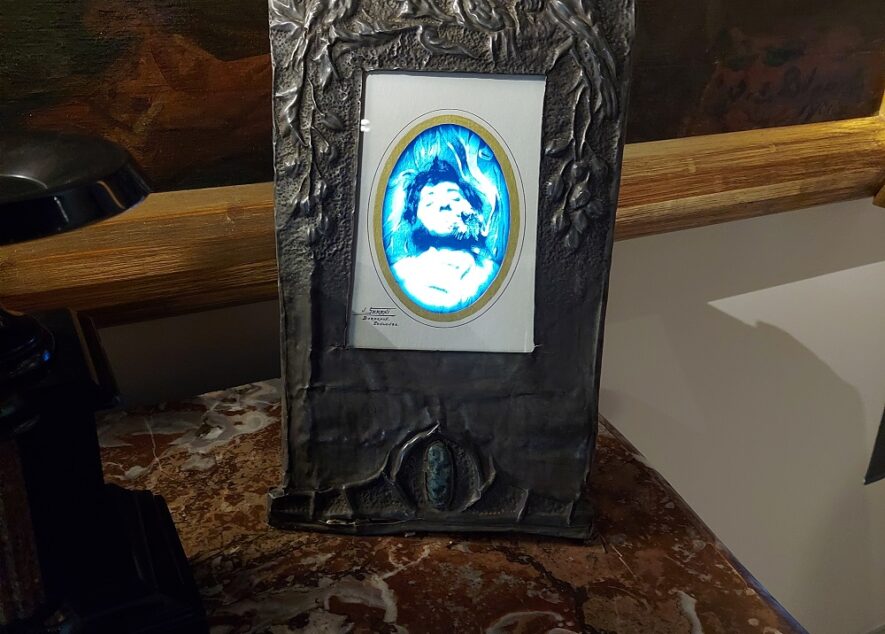 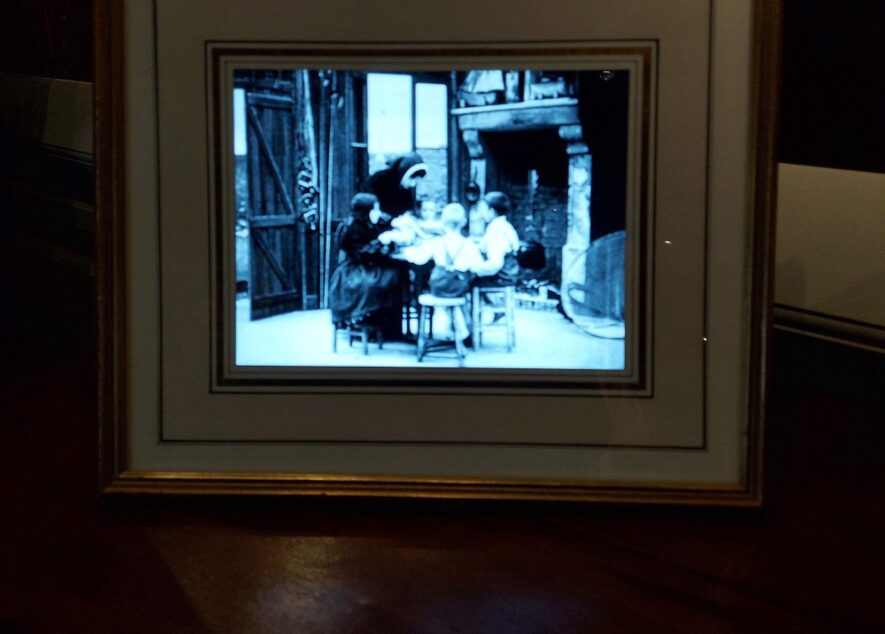 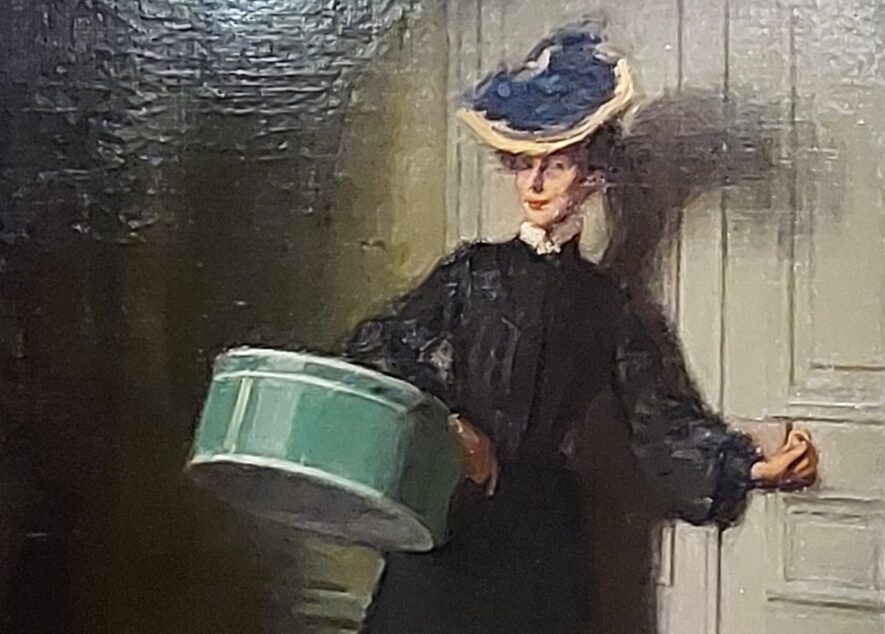 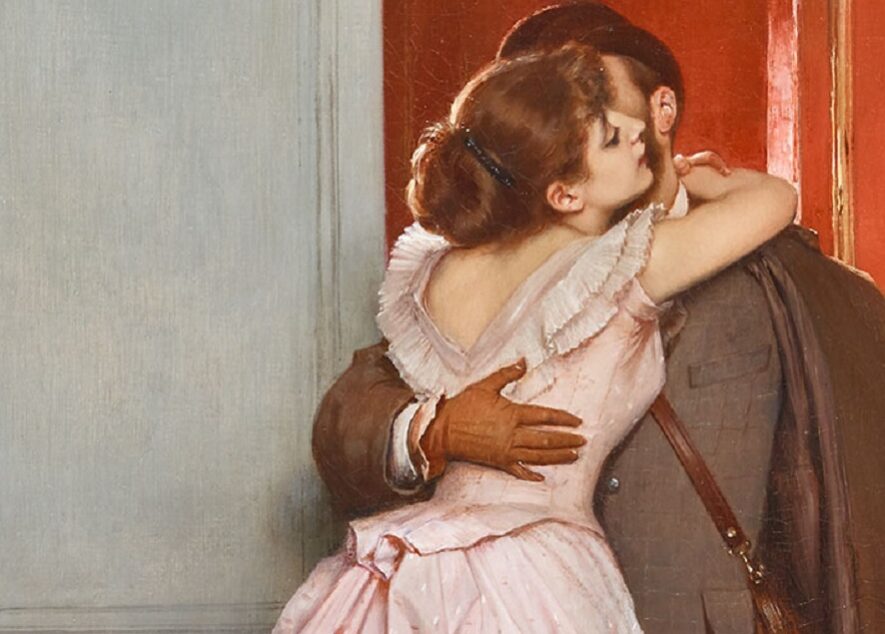 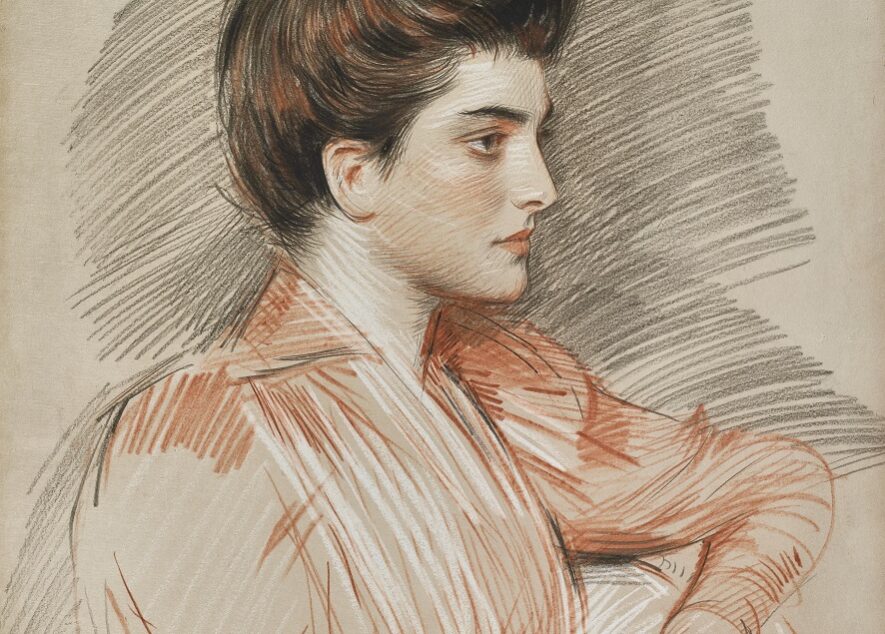 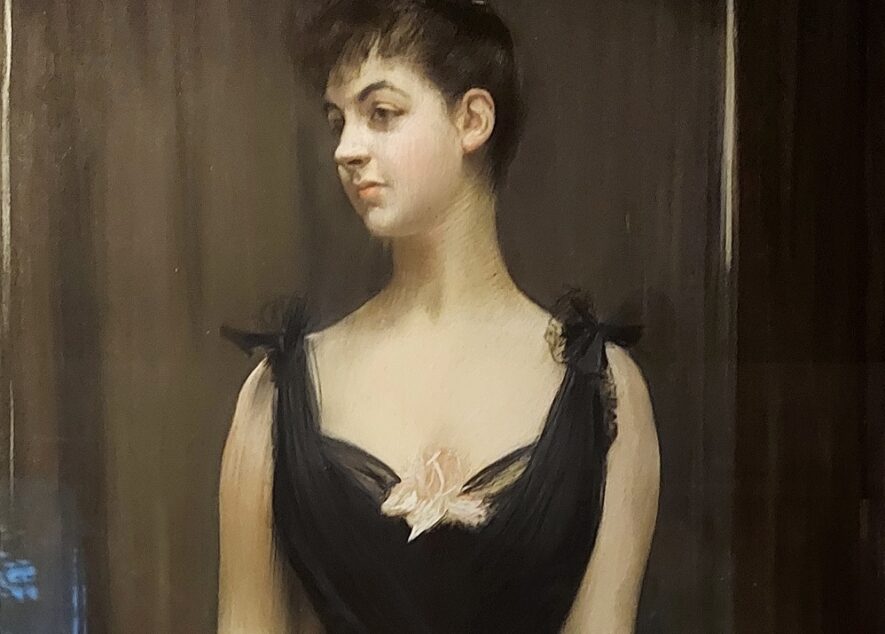 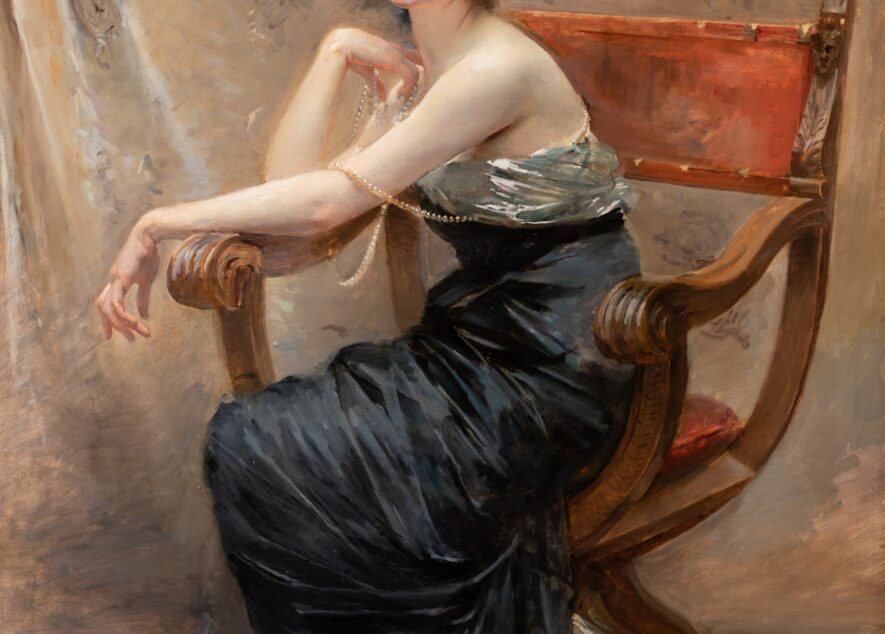 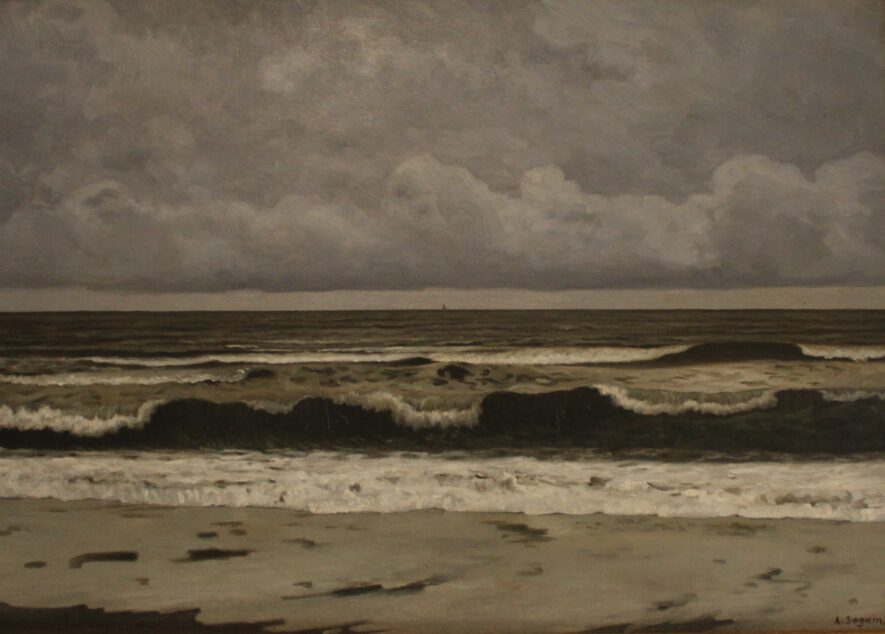 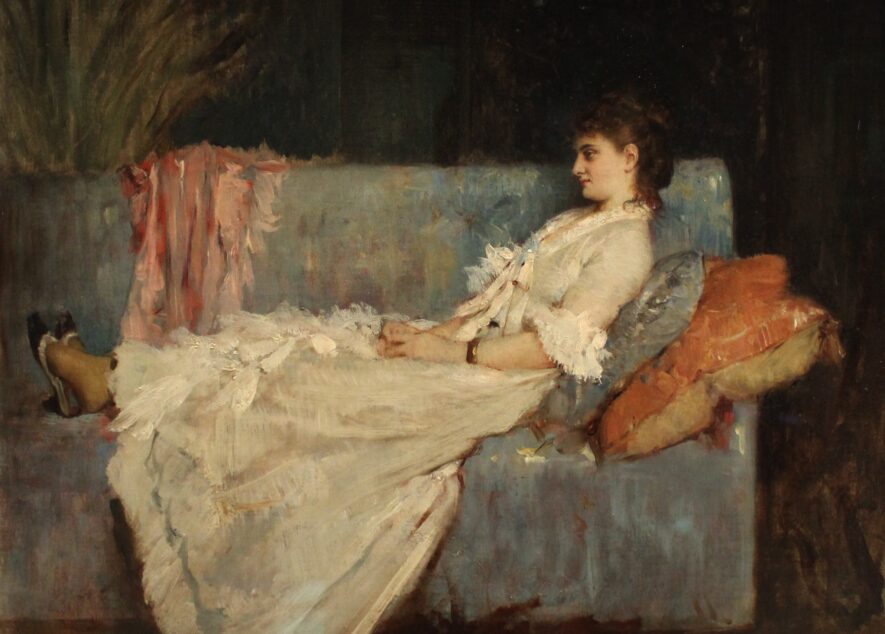 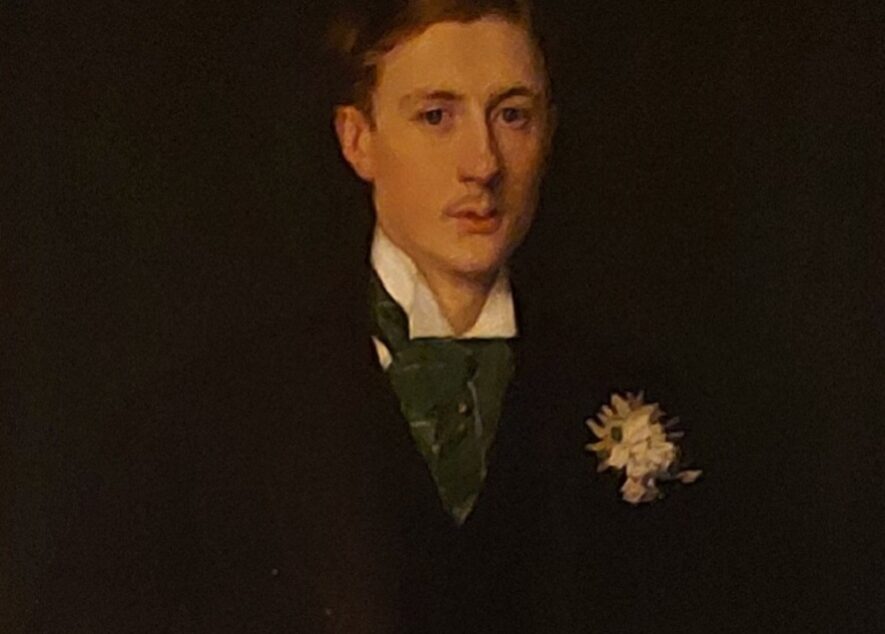 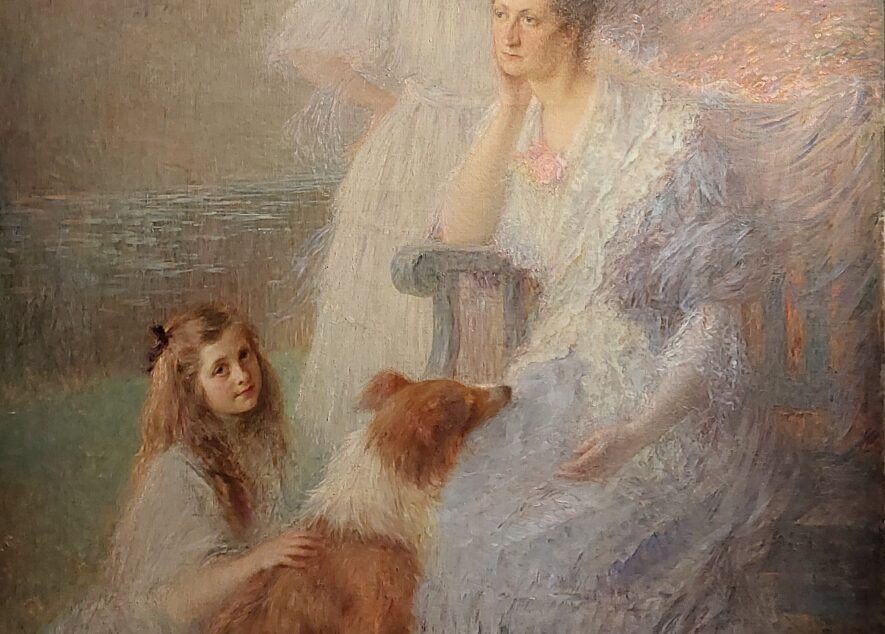 Trained by Louis-Charles Timbal and Jean-Léon Jérôme, René-Xavier Prinet (1861-1946) took part at the end of the 19th century in the creation of the "Black Band" or group of "Nubians"; a group of artists also frequented by Jacques-Emile Blanche, who differed from the light palettes of the Impressionists and the flamboyant ones of the Fauves. As part of this network of faithful friends, René-Xavier Prinet experimented with a palette of dark tones and compositions marked by contrasts between light and shadowy areas.

In the "Modiste," the range of blacks, greys and beiges is very refined and contributes to the extreme simplification of the composition. The turquoise hat box, the white collar of the bodice and the bright yellow of the hat are the only brightly coloured elements and attract all the light in the scene. This light guides the eye to the young woman's face and to her gesture hanging on the door handle, thus contributing to the mysterious character of the work, as a metaphor for waiting.

Auguste Toulmouche (1829-1890), cousin by marriage of Claude Monet, led him in his early apprenticeship in Paris and was one of the most famous painters of the Second Empire.

At the beginning of his career in 1850, he painted genre pictures inspired by antiquity and joined the "Neo-Greek Group." However, he soon abandoned this style and turned to the contemporary world, influenced by the neo-classicism of his teacher Charles Gleyre. He was one of the first painters to compose scenes inspired by the bourgeois life of the Second Empire: his paintings depict the interiors of social life and elegant young bourgeois women.

Élisabeth Van Biema (1878-1949), born Joseph, was the wife of Émile Van Biema, a philosopher who specialized in Emmanuel Kant and Gottfried Leibniz.
Helleu (1859-1927) was one of the artists who best synthesized modern elegance, both in his paintings and in his etchings and drypoints. He depicted with indisputable artistry the gestures of feminine grace in the 20th century, leaving us with unforgettable testimonies of the 1900s and of the society described by Marcel Proust. His worldly effigies and feminine silhouettes are among the most precious images of the Belle Époque. One cannot but admire the sobriety, refinement and discreet elegance of his drawn models, which have often been compared by contemporary critics to the graces of Lancret and Watteau.

Suzette Lemaire (1866-1946), a painter herself, was the daughter of Madeleine Lemaire, a great organizer of society parties, one of the inspirers of the character of Madame Verdurin in "In Search of Lost Time".

Marcel Proust and Reynaldo Hahn spent their holidays in the Lemaire's house in Dieppe in the summer of 1896, in the company of Suzette. Coming from a private collection, this painting is presented for the first time in an institutional public exhibition. Pastel is undoubtedly the medium of excellence for Jacques-Émile Blanche, a genre he favoured in the 1880s and then tended to abandon, which makes this painting even more precious.

Madeleine Lemaire (1845-1928), a famous salonnière, was renowned for the quality of her paintings of flowers. She illustrated Proust's first book "Les Plaisirs et les Jours" with her work.
This portrait shows a young woman sitting on an armchair, the pearly sheen of her skin and the satin of her dress accentuated by the background, a beige hanging with a stylised flower motif. The pose seems spontaneous; playing with her pearl necklace, time seems to be suspended. The model perfectly embodies the feminine fashion of the time: a black satin sheath with a white veil framing the décolleté and a ribbon enhanced with black feathers.

The model's face and piercing gaze recall the features of the poetess Anna de Noailles (1876-1933). At the age of 38, she was at the height of her fame. The publication of her collection of poems "Les vivants et les morts au Mercure de France" on 26 June 1913 marked the height of her success.
This portrait is part of Madeleine Lemaire's last submission to the Salon de la Société Nationale des Beaux-Arts in 1914, at the age of 70.

Armand Félix Abel Seguin (1869-1903) was a Breton draughtsman and painter. As an impressionist painter, he soon became a follower of the Nabi movement just like Paul Gauguin and Maurice Denis of the école de Pont-Aven, but his graphic expression remains very personal. A friend of Paul Verlaine, Paul Gauguin, Oscar Wilde, Emile Bernard and Paul Sérusier, he lived a bohemian life in the four corners of France, pursuing his vocation as an artist in very precarious conditions. He died at the age of 35.
Today, only 17 paintings by Seguin can be found in the world.

An intimate painter, Rene-Xavier Prinet is part of the high-society painting world of the inter-century period, to which he brings the spontaneity and lightness of a pictorial gesture that evokes more than it depicts.

Paul-Louis Baignères (1869-1945), a young painter from a good family, a pupil of Léon Bonnat and Henri Gervex, was a friend of Jacques-Émile Blanche and of Marcel Proust, who dedicated one of his studies for La Revue Blanche in 1893 to him.
He welcomed the writer on holiday in 1891 in the family villa Les Frémonts, in Trouville. It was during this stay that Marcel Proust had his first portrait drawn by Blanche, a drawing dated 1st October 1891. The same year, the painter painted this portrait of his young colleague. It is striking to see in this painting the characteristic features of Blanche's style at that time (in particular the black background) which are to be found in the painted portrait of Marcel Proust done the following year.

In 1912 Pathé released the 28 mm, a first approach to family and rural cinema. The camera is autonomous (the film is advanced with a crank that also generates the electricity necessary to light the projector).
It is presented in a carrying case. The small lighting lantern already prefigures the one that will be used in 1923 for the Pathé Baby (9.5 mm).

The film:
Alice Guy (1873-1968) was the first director of cinema and one of the first to make fiction, not documentary shots, as early as 1896. She tackled all styles: drama, comedy, historical...
"La course à la saucisse" is a slapstick comedy of 15 shots of great precision, playing on destruction and accumulation. Two shots of the triumphant dog, on a pedestal, frame the chase whose exterior shots document the suburbs of Paris.

Bohemian artist, caricaturist, lithographer and illustrator, Charles Léandre (1862 - 1934) had his studio in Montmartre, a lively place of Parisian nightlife where the bourgeois came to be entertained in music halls and cabarets such as the Chat Noir, frequented by the painter.
Born in Champsecret (Orne), Charles Léandre frequently stayed there. He then devoted himself to portraiture, choosing his models from among the members of his family, as in this female portrait representing his sister Mathilde and his young nieces Jeanne and Madeleine Lemoine, his favorite models.
The treatment is subtle and recalls his initial training with his master Alexandre Cabanel.